This week saw the United Kingdom take to the polls to vote in the 2015 general election. One thing that was a noticeable hassle, was the voting process itself. Let me explain how my personal experience panned out:

1. Drove to my local polling station.
2. Drove around for a few minutes as there were no parking spaces in the street.
3. Walked into the polling station and joined the queue.
4. Gave my details, name crossed off a list, handed my ballot paper.
5. Walked over to the booth, read what was on the ballot paper.
6. Ticked the box, and then posted it in the ballot box.

If you haven’t fallen asleep yet, you’ll probably agree that it sounds rather lengthy doesn’t it? The simple solution — digital voting, or is it? After researching into digital voting, and other counties that adopt this system, I wanted to see if the UK had any plans or if we are even putting this idea into action.

In 2013 The Speaker of the House of Commons,  John Bercow launched the Speaker’s Commission on Digital Democracy to look into the matter. The findings of the commission were published in January, with a range of digital targets and how the electorate could interact with politics in an open, easy and transparent way.

One of the main points that stood out was the target to introduce digital voting to the UK by 2020.

The DDC recommends that the Electoral Commission should consider how best to establish a digital election ‘results bank’. (Recommendation 24)

At first I thought that this was quite a long time to wait for a digital system, but reviewing various other reports, it’s not as simple and straight forward as creating a platform. There are huge amounts of variants that need to be taken into consideration, such as security, digital identification, maintaining online/offline voting, usability, the list goes on.

However, one country that seems to have got the furthest with digital voting is Estonia. The country uses digital identification cards which not only allow citizens to vote digitally, but they can use their ID as a travel card on public transport, along with sending money to each other. Digital voting in Estonia was launched in 2005 with 9,317 people voting online (1.9%) out of 502,504 who voted.

The UK’s Government digital service would highly likely be tackling this project once it’s properly been given the green light. In 2012 GDS completed a discovery phase around allowing users to register to vote online, with the final digital product going live in England and Wales at the start of June 2014. On 21st August 2014, the platform had received it’s one millionth registration. 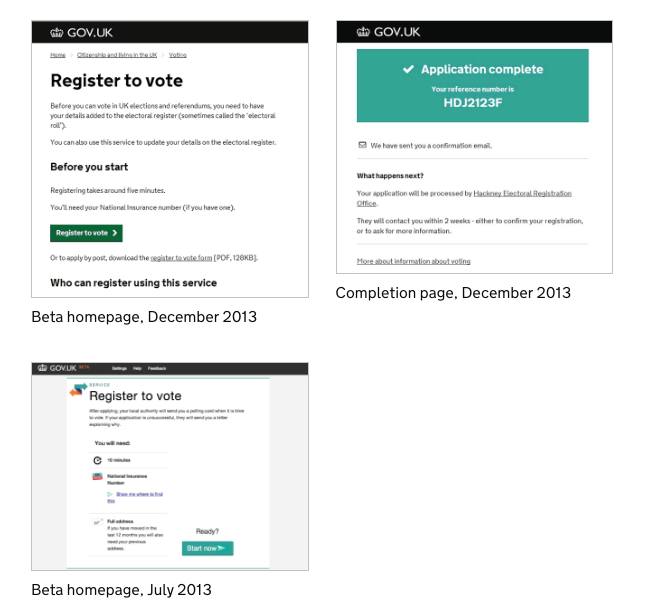 In the meantime, we’ll have to wait and see what progress is made with digital voting in the UK. It’s going to make great reading to see the metrics behind a launched platform, and how this data compares to a previous postal/physical voting turn out.