At adaptable we see all types of eCommerce briefs landing in our inbox on a regular basis. Businesses of all shapes and sizes, some in the early stages of their eCommerce journeys, others more established.

One conversation however that is becoming a regular occurrence is focused around the growth potential of using Shopify and the feeling of being “boxed in” by the technology the platform operates on:

We don’t think Shopify can handle our businesses scale, I think Magento would be better for us being able to choose and manage our hosting too

We use both platforms in our work and it’s surprising how many clients will later opt for a Shopify solution once the technology, running costs, turnaround time and growth potential has been properly explained and weighed up against all the options. As Shopify is a SAAS based product (where you pay a monthly subscription fee) for things such as security, hosting and updates to be taken care of, Magento is an open source platform which you install on you own server space.

One thing that needs to be fully investigated before launching a Magento site is your hosting infrastructure. If the incorrect set up is selected this can really have an impact on your websites delivery and conversion. If you hit a major spike in traffic off the back of a targeted campaign and you don’t have the right hosting solution in place, your site will simply not be able to handle what’s incoming and will likely go down and will require manual intervention to get back up and running again. There are measures that can be put in place such as resizable cloud servers, introducing load balances & having a separate content delivery networks (CDN) etc but these costs can quickly add up if you need serious fire power for your site. Whilst you’ll pay a monthly fee to Shopify for their product, Shopify+ plans are able to take 3 million hits per second, 6,000 checkouts per minute, is PCI compliant out of the box and has uptime of 99.7% – removing lots of manual work which would have to be undertaken with Magento by a team of developers.

One thing that surprises most eCommerce Managers that we work with is just how simple the Shopify CMS is to use. Combining smart drag and drop blocks for content and template re-design, updates can take a minutes, not hours and days. Whilst Magento has released a better admin interface in it’s recent 2.0 update, it still feels a little dated, and product creation is still somewhat of a chore. Taking into account that Shopify also has a retail POS application that can link into the CMS out of the box, is also another benefit it has over Magento, which would again require additional setup. 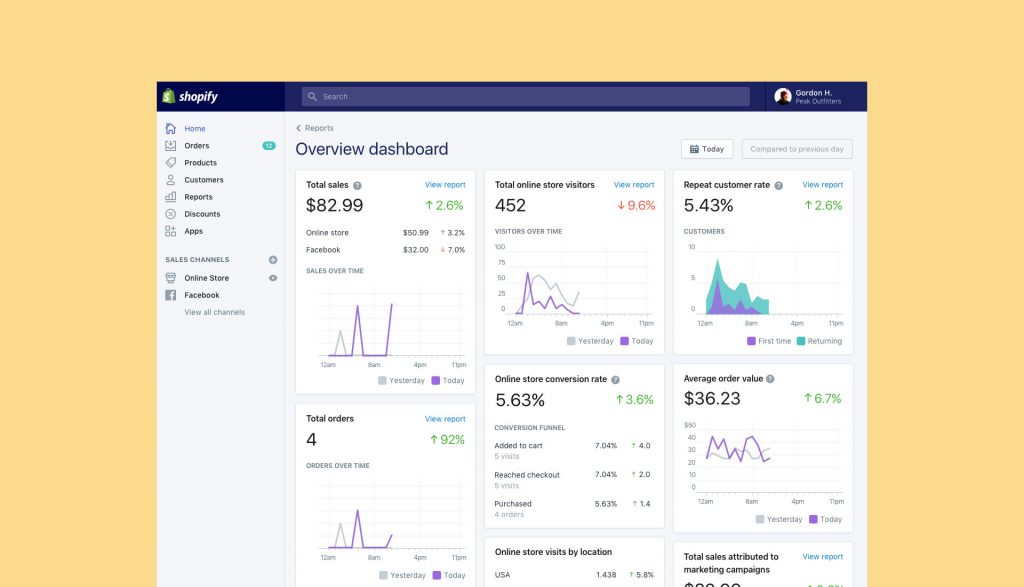 Whilst Magento, being open source means you can develop on the platform to tailor certain things to your business needs, Shopify being SAAS means you can’t alter the core platform. This might be a problem if major functionality is needed within the base set up. However, bespoke needs can still be implemented. Like Magento, Shopify has an extensive marketplace of platform add-ons. Some of which are free, some come with a small running cost of $5-10+ a month. From our experience working on Shopify projects, when a client has a bespoke need that needs to be a part of, or plugged into Shopify, we can develop bespoke applications specifically to the additional function or technology that Shopify provides as a base.

So can Shopify handle my eCommerce ambitions?

To really understand just how much traffic and revenue Shopify can handle, a great example is Gymshark. The brand was recently voted one of the fastest growing global fitness and apparel brands this year and decided to migrate away from Magento to Shopify.

According to Shopify’s merchant success feature, “Trusting that Shopify Plus can scale no matter how rapidly Gymshark grows helped the company reach £41 million in sales during 2017, generate three million social media followers in 131 countries, and become one of the fastest growing global fitness and apparel brands globally.”

Shopify was founded in 2004 and Magento in 2008. According to google trend data in the last few years, Shopify has managed to massively leap in customer interest over Magento, it’s likely that this interest is due to how accessible Shopify have made eCommerce not just to merchants but to eCommerce agencies like adaptable.

Whilst we work with both Shopify and Magento eCommerce platforms, each company that we work with will go through an immersive discovery session to make sure the right platform is selected for them (or a bespoke option) and we’ll clearly explain without any jargon the positives and the negatives all options.

If you’d like any advice on migrating or setting up your eCommerce platform, we’d be happy to walk you through our processes.